“Possum.” The word and what people mean when they say it has led to a growing confusion in recent years as it has increasingly been mistakenly applied to separate species. By and large there are two different animals people refer to when they use the word. The animal found in Australia and New Zealand which is truly a “possum” is often known as the “Brush-Tailed Possum.” The North American species that is often misnamed is in fact a separate animal entirely called an “opossum,” and the most common variant of this is the “Virginia opossum.”

The confusion and mistake is understandable. The names of both animals sound alike, they’re both marsupials. The species look (somewhat) similar and their habitats are separated by the entire Pacific Ocean so the need to make the distinction has only become relevant in recent decades.

This distinction however has become particularly important in the fur trade, as both animals are commercially-relevant fur-bearers and in particular in New Zealand the fur of the possum is being used in a range of fashionable and innovative ways.

First of all, how do scientists distinguish the two? Well, not only are the two not the same species, they are not in the same family or even order. While the possum is linked with the other famous marsupials of Australia (e.g. kangaroos & wallabies) the opossum only has other sub-types of opossum for company in its taxonomic group.

Both species are regarded as marsupials, starting off small growing to a maximum size of 6.5 kg, but comparing the two most common types, i.e. the Common Brushtail Possum and the Virginia Opossum, the difference is easy to see. 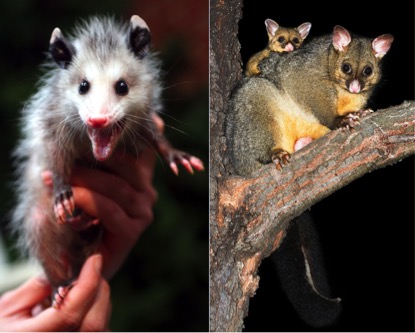 The possum as you can see to the left has thicker fur, a rounder body and less pointed features than the opossum.

Both have moved significantly from their original habitats with the opossum moving Northwards from South America and the possum having been introduced to New Zealand from Australia.

Indeed this migration to New Zealand has created enormous problems for the native plants and animals there, with the possum destroying rare and even endangered plants while competing with birds for food and eating their eggs. For this reason New Zealand has declared the goal of eradicating this invasive alien species by 2050.

This conservation effort has presented local businesses with a by-product resource that without their vision and creativity could have been left to waste. Instead, they are collecting these precious and luxurious materials and using them in articles being sold in New Zealand and abroad. In doing so they are making a product that has gained a lot of interest from those interested in sustainable fashion.

Possum fur is one of the two major products being made from this process, but one of the more innovative is possum merino, whereby the possum hairs are spun with merino sheep-wool creating a blended product that has amazing qualities of softness and warmth. The latest innovations include the possum fibre being spun with cashmere, creating luxury products now making their way into high-end fashion.

The possum are often trapped, which is done in accordance with the 1999 Animal Welfare law and the guidance of the National Pest Control Agency and though the aim is to eradicate the possum, it is being done with the welfare concerns for the animal as an absolute priority.

Going back across the Pacific, the opossum is trapped across the United States with almost 200,000 taken in 2014 alone (the last year for which records are available) although prices for this fur have been lower in recent years (average $2.86 per pelt in 2016: source IFF). The situation of the opossum however is distinct from the possum as it is a native species and can be harvested indefinitely as long as it is done sustainably, similar to many other North American fur bearers (e.g. coyote, bobcat, muskrat etc.)

Opossum is used more as a traditional fur, (leather and hair together) without being mixed into any blended fibres but it is a good example of one of the many abundant species trapped regularly in North America. The economic footprint and benefit of trapping is magnified many times by the fact that it in most cases wild fur sales are contributing a percentage to the incomes of rural and indigenous communities. This income, which can be seasonal, is often the difference-maker between lifestyles in remote areas being economically viable or not, to say nothing of the social and traditional importance of trapping in these areas.

To summarise Possum and Opossum